Back to the Translation Guide

There are 15 images, including 2 without any text. Please translate the SVGs that need it, and create PNGs from them.

Thumbnails are made from graphics under CC-BY 4.0 licence (or later) by Journalism++

You may need to install the following fonts for a proper rendering:

The first three are in static.fsf.org/nosvn/enc-dev0/fonts/. Retrieval of PXL-2000 is described in the Pitfalls section.

The installation method depends on the distribution. In Debian/Ubuntu (Gnome), you just need to open one of the font files with the font viewer program, and click the "Install the font" button. The file will be copied to the .fonts/ directory in your $HOME. This has to be repeated for every file and the font will not be available to other users.

A more general method is manual installation, which is described here for Debian/Ubuntu. The location of the system fonts directory may differ in other distributions, but the principle should remain the same. Each font is stored in a specific subdirectory of /usr/share/fonts/; Roboto goes to freetype/, the other 3 to opentype/. After copying them there, you need to update the font database, so that the applications can use them. This is what the fc-cache command is for.

To edit an SVG and export it to PNG 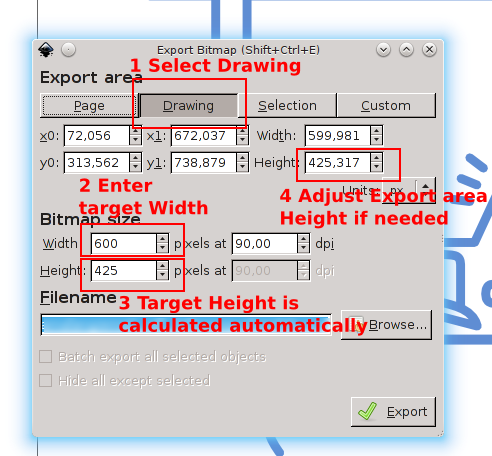 For some reason, this font was added to the Git repo in June and immediately removed. You can retrieve it by creating a local branch and resetting it to the relevant commit (dated 2014-06-16 21:21:12, with message "Added the pixel font..."), as follows:

Let's assume you are already at the root of the Git repo.

1. Display the history of the static branch.

2. Look for the "Id SHA1" of the relevant commit and write its first 7 digits somewhere. Let's assume they are 1381085 (the Id is probably different in your local repo).

4. Reset pxl to the relevant commit.

5. The PXL font is now in the static/fonts directory. Move it to the root of your home directory to make sure it won't disappear when you switch back to the master branch, or install it right away in the same directory as Dosis and ArchivoNarrow (opentype fonts).

There is a small white arrow below the "PRIV" key in the svg. You must first ungroup the elements (select the drawing, then Object/Ungroup) before selecting and deleting this white arrow; save, then export (in this order; see "Leakage of personal information by Inkscape" to know why). 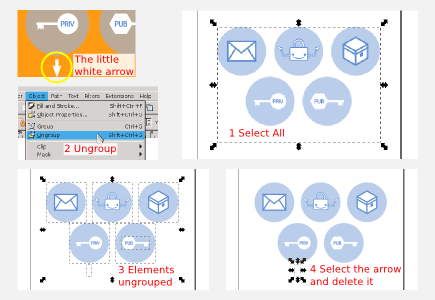 How to avoid leakage of personal information by Inkscape

If you open gnupg-infographic.svg in a text editor, you will notice lines such as:

What are those for?

If you don't want the whole world to know your user name, the structure of your filetree and the previous name of the SVG (who knows, it may contain the name of your pet dinosaur), you can remove the content of inkscape:export-filename and sodipodi:docname. After removing the export-filename, you will not be able to use the File/Save menu entry anymore, but File/Export to Bitmap..., File/Save as..., and File/Save a copy... will work. The latter two are not recommended, however, because they don't preserve the transparency of the background.

Removing the xlink:href URLs is more delicate, because they may be in use. If they are in a layer which is hidden and will not be made visible again (such as a bitmap mockup), the link can be removed by deleting the layer. Otherwise, the document has to be imported again with the Embed option. As it turns out, there is only one of those links in the Email Self-Defense series. It corresponds to a layer of gnupg-infographic.svg named "Bitmap de fundo". This layer is hidden and can be safely deleted.

Examining all the SVGs of a directory may be rather tedious. This little script (named "detect-svg-leakage") will do it for you. The instructions are within the script (lines beginning with #)

When it comes to the actual cleaning, "anonymize-svg" may prove convenient. It saves the non-anonymized versions for your own use.

Back to the Translation Guide