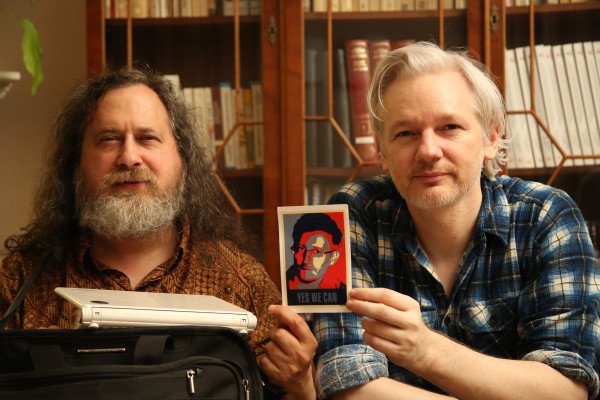 Editorial: Looking Through The Prism

Edward Snowden achieved in a few weeks what we could not do in the last two decades. Thanks to his exposure of the massive surveillance program of the NSA, Prism, he brought to the mainstream the topic of privacy. He demonstrated the need for it, and the need for decentralization. He turned decades of accusations of police state and loss of freedom, that were until now ignored by the general public, or deemed paranoid, into visionary statements. The Prism scandal, exposed, gives us free software developers and activists, an unprecedented opportunity to leverage mass consciousness and collective intelligence to break free from the social network services oligarchy, to build a truly end-to-end and participatory (voluntary) social environment.

But that won't go without a hitch. In this first issue of the GNU/consensus Whistle, we'll see how a momentum is being formed that we need to seize for binding chaos[1] and overcome the current trust crisis altogether, for the benefit of all people.

This issue will feature some less known software projects that may be of interest to developers. Finally, the Whistle will provide a short agenda of things past and to come, for which you're welcome as a project or community manager to submit either to the list or to the wiki for inclusion in the next issue.

It's also time that we think about organizing a common fund, or a shared funding strategy to cover development and hosting expenses of free software social networking. Each network, each software project should evaluate and report its real costs and needs, so that we can estimate what it takes to reach a decent independent social networking. Lack of finance has long been hindering the development of sustainable alternatives to centralized commercial platforms. Maybe it's time to reconsider that central issue, in the wake of the massive spread of awareness relative to the Prism leak. From there, I'm convinced there's an opportunity for a globalized solidary economy for independent social networking, and economies of scale. Think FreedomBox, Guifi.net...

Part of the Web felt abused by this change, while others praised it. So what happened?

Last year Evan Prodromou, creator of WikiTravel, StatusNet, and Pump.io, a long-time free software and decentralization activist, jumped on the NodeJS bandwagon and started creating the Pump, a leaner version of StatusNet, meant for pure activity streams, and aimed at developers.

Apart from the technical appeal of Node (evented I/O streaming, Javascript on the server and the client, etc.), the Pump is designed with efficiency in mind: @evan commented a tenfold resource gain between StatusNet and Pump.io for a comparable amount of traffic.

Evan could serenely transition to Pump.io by joining forces with the GNU social team: he donated the StatusNet code to the FSF, for the benefit of the GNU social project, and the assurance that his baby remains healthy in good hands. The official announcement was made last month, but the integration of StatusNet, and Free Social, into an unified base for GNU social took more than a year (if you wonder why it took so long, remember that code is as much about language and humanity, than it is about technique.)

Congratulations to the GNU social team for pushing this to a stable release state, under the GNU Affero General Public License!

At the heart of the controversy lies the loss of functionality that accompanied the switch from StatusNet to Pump.IO.

Not only visually[1], but more importantly about broken links, missing hashtags, the lack of group support, and federation features in the core of the Pump. People were expecting a drop-in replacement, but it feels more like a drop-out.

The switch had been announced a long time ago, with repeated warnings and a clear way out: export your data, build your own StatusNet. Although I can understand the anger and the frustration at waking up and seeing a completely different experience, nobody can tell they were not forewarned, and I wish for the channeling of that (wasted) energy into crafting solutions.

Of course all can mourn the loss of groups, a fantastic feature of StatusNet^HGNU social, and the lack of bridges to other systems--including its own past incarnation, as one may be clicking dead links[2]. That is not the first time such a thing occurs in the (federated) Web. One must remember the terrible transition of Lorea from Elgg 1.7 to Elgg 1.8 that broke most of the federation features as well, and left the inhabitants without a bridge. Let's hope that this state of affairs will encourage more people to fix the pipes quickly, and not leave it alone and leaking. As much as we enjoy leaks, that one is not of the kind we're craving, and given the momentum the Prism leak created, maybe a good old slap in the (inter)face with a large trout will act as a much needed wake up call.

Resilience over accusation wins every time. This event demonstrates the importance of coordination between free software projects to ensure the global stability of the federation, and the lack of incentive for cooperation that leads to sub-optimal decisions. What could have happened, or what should have happened in an ideal world, is that Identi.ca and GNU social work with other public instances of StatusNet to ensure a smooth transition for people and organizations that relied upon groups, reliable links, and the Twitter bridge for their communications.

In the current state of the free social network services, the decisions of ones influence the whole society way too much. Decentralization is needed, so let's take this as a lesson: (1) too big a node makes a single point of failure; (2) we must be cooperating in order to succeed; (3) we need economic incentives to cooperate efficiently.

Incoma is an application to visualize and characterize conversation flows. Its objective is to enhance collective intelligence and provide an appealing interface to facilitate massive participation in conversations.

Try the demo at http://incoma.org/?c=sandbox

With the Hollyweb looming over the HTML5, Norbert Bollow and Jesús Leganés Combarro decided to take action and created FreedomHTML.

FreedomHTML is a subset of the W3C HTML5 specification, excluding the parts which are troublesome for the users' freedom. This project started in response to W3C recommending Encrypted Media Extensions (a form of DRM) in HTML5. The authors highlight that FreedomHTML is a profile and not a fork: this means no compatibility problems and easy implementation for browsers/validators developers.

FreedomHTML manages to underline what Free Software proponents see as a threat in the current HTML5 discussions and to provide a viable alternative for users in the worst case scenario.

"GNU LibreJS aims to address the JavaScript problem described in Richard Stallman's article The JavaScript Trap. LibreJS is a free add-on for GNU IceCat and other Mozilla-based browsers. It blocks nonfree nontrivial JavaScript while allowing JavaScript that is free and/or trivial."

Web developers are encouraged to release their free Javascript code using the methods promoted by the LibreJS project. Given the growing trend in web applications and sites to require javascript running to even access the contents, such a provision becomes necessary to mitigate the large attack surface against basic privacy already provided by web browsers.

Prism-Break: Out In No Time

Nylira's genius meme Prism-Break, named after a successful TV series where a brother sacrifices his freedom to free his innocent brother, received instant sympathy around the world. In case you missed it, Prism Break is a one-stop shop to discover how to break free from proprietary software and surveillance services. It lists proprietary solutions, along with free software, or grassroots alternatives, and explains why some obvious choices are missing. It's a great resource for anyone to watch trending alternative projects. You can read an early interview of Nylira conducted two weeks after he released the project. We're looking forward for more of it!

The German NGO Digitale Gesellschaft e.V., a member of the European Digital Rights (EDRi), published an open letter to European governments, national parliaments, and EU institutions. Their 12 recommendations are available at http://www.stopsurveillance.org/, and call for the rejection of illegal surveillance, the respect of the basic human rights of personal privacy and confidentiality of communications. The tenth recommendation reads: "Actively promote free and open source projects for digital self-defence and promote the use of this technology."

State of The Federation

There's a heated discussion on the SocialSwarm and GNU/consensus mailing-lists about a proposal crafted by Elijah Sparrow and Klaus Schliesiek:

is deployed in browsers).

virtual user, with all users in the group able to receive and send as the group.

The purpose for this meeting will be to prepare the Socialnet_3.0 workshop at 30C3:

We should try to get an overview of current activities for a democratic social network, propose an agenda for the 30C3 workshop and make a list of whom we would like to participate.

The aim of the 30C3 workshop itself will be to build a consensus of how socialnet_3.0 is going to look like and to coordinate activities such that this goal can be reached within the next 10 years.