From LibrePlanet
Jump to: navigation, search

Once you have a draft version done, seek feedback from the GNU Generation on what to improve. Remember: this will be used to represent GNU Generation!

It would be really nice to have a logo that has two versions: one with the text "GNU Generation", and one without, but this is not necessarily required. Make sure to capture the spirit of GNU Generation, and don't forget to make sure there are no legal problems if you use a derivative image.

How to get started

Inkscape is a good drawing program to use to design the logo. An SVG logo would be best, since it is scalable and can be exported to any size of a PNG easily.

Upload you logos in the "Draft Logos" section, but remember that they are only drafts, and so they get better and better with criticism and community feedback. So, don't be afraid of fail, do something wrong or change or discard a logo that you previously thought was good.

"GNU Generation project" is not in the list (group, individual) of allowed values for the "Is entity" property.

The voting is now closed

This section was created in order to list concepts that must be included somehow in the logo. This will be a very helpful tool for users to create a logo or discuss why something in the logo is wrong and has to be changed, or why something is good.

In this place, we also must discuss how would be the best way of represent this concepts graphically. This will generate ideas that can be used by the users to make their draft logos.

Fell free to add or remove a concept you think you should or shouldn't be in. But, please, remember to discuss the change with the community.

The idea is simple: Gnu Generation is a place for youn people to contribute to the OS world, in a way, is like planting a seed, wich will grow in the future. Also, You can see the letter G inside. I'd like to write more about this logo, but my english writing is not so good...) Anyway, I think I couldn't comunicate the idea of "Open". Any Ideas? -Maurob

It looks great! I really like the thought that went into the design, and the professional look. I wonder what it would look like with the text somewhere inside the swirl... Also, maurob, you should probably create a profile; you don't have to fill out all of the fields if you don't want. See the GNU Generation home wiki page for the link. -Maxshinn 23:23, 15 August 2009 (UTC)

I'll try that text idea. I've just create my profile, though is not very complete. Thanks! Could someone put a title to both logos such as "Logos" or somethng like that? --Maurob 17:57, 16 August 2009 (UTC)

I've just made a text version, wich I put next to the no-text version.

maurob: I'm really liking the seed. I think your idea of putting the text below looks a lot better than putting it on the spiral.

I've uploaded 2 new versions with diffrent text positions. In my opinion, the last one (wich i'll upload again after this) is the best of the 3. What do you think?

My personal favorite is the first one with text (the green lines above and below it) but you might want ask on IRC or the mailing list for other opinions and suggestions. --Maxshinn 15:55, 18 August 2009 (UTC)

This is a good place for suggestions, but the mailing list is more visible.  :) Join the mailing list first (there is a link on the front page) and then send your email to gnugeneration@gnu.org. --Maxshinn 13:22, 19 August 2009 (UTC)

I like it. But I wouldn't put the black background (I wouldn't put any background). Also, I would change the colors of the text, maybe red (wich is the complementary color of green)?. Oh, I think text shouldn't be over the logo, it should be next to it. --Maurob 17:19, 31 August 2009 (UTC)

NEVER EVER mix red or orange with green or light brown colors, colorblind people may end up having trouble with it. Red also, doen't mix very well with either blue or black (it kind of glows), so it's not very versatile. --Adrwen 13:13, 5 September 2009 (UTC)

The "Statue of Liberty" is the most known symbol for freeodom and independency. Thats why I think it matches very well with the philosophy of GNU.

This image is just a draft and a basis for feedback from the community. I will use your critics and the draft to create a Logo.

Maybe I will use a smaller version or just a part as an engraving for a coin which could be the Logo ;-)

I have drawn it by myself by templates from the internet.

(Its also available as SVG.)

Orca: That is drawn really well. The only thing is that many people associate the Statue of Liberty with the USA. We want to stress that this is an international program. You might want to see what some other people here think. If nothing else, you should make sure to submit it to OpenClipArt, as long as all of the derivative images you used are in the public domain. --Maxshinn 15:46, 17 August 2009 (UTC) 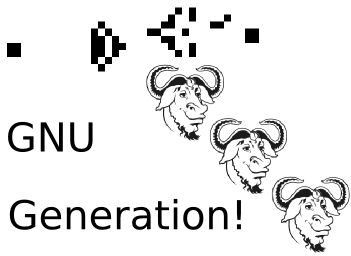 Obviously this is a pun, the gun, which I've borrowed from Conway's Game of Life, generates GNUs instead of gliders. One could say that it's a sort of "GNU generation". It's a bit bloated, but I thought someone might find it amusing.

Mmm, those that have never player Game of Life (I think I haven't) may not understand it. Also, I think you should look how to organize better the elements. The way it's now looks more like different images rather than a logo. Then, you should keep it simple, this is very important.

My recomendation is that you should try to think why did you choose to use the Game of Life's gun and, instead of actually draw it, try to think in the idea that is behind it. For example, If you choose the GofL theme because for you it communicates a particular generation, try to draw a more general image about that generation. With this I want to say that if you want to communicate the idea of animal you don't want to draw a duck (or a dog, or a cat), you want to draw something more general. That's how everybody will understand it. --Maurob 23:54, 31 August 2009 (UTC)

I'm really a fan of this logo. You used symbolism so creatively! I'll be anxious to find out what some other people think of it. --Maxshinn 19:06, 2 September 2009 (UTC) 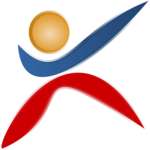 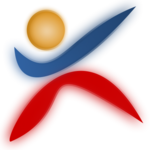 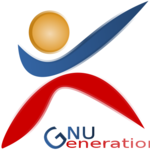 The idea of the logo is very simple: Young man embodied in the logo mean Generation and community (maybe Freedom also), The hand that rise to the top mean the aspiration for the future. Colors used are the same in the "GNU Operating System" phrase into www.gnu.org. --Orango 01:25, 18 September 2009 (UTC)